March to the Sea 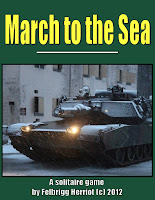 It's 1995 the cold war is over and an uneasy peace stands, but the weapons of mass destruction from those bad and scary days still exist. A particularly nasty old-guard leader has had himself "elected" as the de-facto dictator of the Czech Republic.

American politicians and leaders are worried. This dictator has expressed extreme anti-American, anti capitalist statements. The Russian leadership have advised the American president that the dictator has access to ex-Soviet chemical and biological weapons stored within the borders of the Czech Republic.

The American president is determined to authorize a risky and dangerous plan to mount a military raid into Czech territory, confiscate the Weapons of Mass Destruction and return them to the United States.

Under the guise of a NATO War Game, the American forces stationed in Germany are positioned close to the Czech border as the first step in the plan. The extreme risk of the operation causes the Americans to not inform the German government prior to the operation beginning, as they fear a warning might leak to the Czechs.

The operation commences on a cold clear night. U.S. Forces advance into the Czech Republic and soon capture the weapons. As the troops start to withdraw back to Germany the weapons are flown to a U.S. Base within Germany.

Realising that the Americans are up to something, the German Chancellor calls up the Bundeskabinett to an immediate session. As details of the American action are revealed the Bundeskabinett become enraged. That the Americans would launch an act of war from their territory without permission is outrageous!. Then to compound that crime by bringing Weapons of Mass Destruction within the German borders without permission is too much!

The executive immediately call the military to a state of readiness, and demand that all American forces in Germany lay down their arms and equipment and evacuate the country. Astonished and astounded by such a request, the American government reels, paralysed with indecision.

General Smith, in charge of all American forces in Germany, determines that neither he nor any of his men will lay down their arms. He immediately commences operation "Long Leap", whereby he intends to march his forces to the sea where men and equipment can be shipped back to the United States. Smith announces his intention and asks that the German military simply stand aside and let them leave peaceably.

The German Chancellor is further outraged that his demands are being ignored, and orders the Bundeswehr to attack any American units that dare to move. The leadership of the Bundeswehr is torn by indecision within its ranks. Many can not bring themselves to fight the Americans, who only wish to leave, but others are ready and willing to commence the shooting.

In this solitaire wargame you take control of the lone American armoured brigade and try to get them to the sea. Set against you are all of the German forces that can be scraped together in time to stop your march. Your objective is to get as many of your units to the coast as you can, fighting any forces that oppose you and  dealing with the unexpected events that occur.

Posted by Felbrigg at 12:24 No comments:

Cthulhu and How I Found Livingstone

In 1871 Henry M. Stanley entered the dark and mysterious interior of Africa in search of Dr. Livingstone. Financed by Gordon Bennett of the New York Herald, Stanley with no experience of Africa was charged with finding and relieving Livingstone, whatever the cost.

This brave young man, took the mission to his heart and commenced a journey that has since become a trek of living myth.

In this book you'll find the entire text of Stanley's book detailing his adventure, interspersed with 70+ footnotes and additional pictures and diagrams not in the original text, making suggestions for how this epic journey might be turned into a Role Playing campaign for those who like a taste of horror in their games.

Available as Paperback : ePUB
Posted by Felbrigg at 10:47 No comments: