Rules for the Conduct of the War-Game on a Map 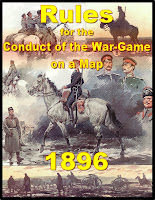 This short book was published in 1896. I've converted an old paper copy of the rules into a modern ePUB format.


In 1896 the British Government published this paper which formalised the adoption of War-gaming in the Empire forces. The rules closely follow those created in 1812 by Reiswitz under the German name of “Kreigsspiel”.

These rules describe and give guidance on how a group of officers can use small blocks laid out on a large-scale map to represent various troops, and then issue orders to those troops. It further describes how those blocks move and how the umpires act as both judges and messengers.

Posted by Felbrigg at 07:51 No comments: 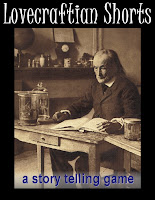 Announcing my latest release, the "Lovecraftian Shorts story telling game". It's a game for three people and gives them a framework for telling a collaborative story where the protagonists can only defeat the evil foe by sacrifice of their minds and/or bodies.

Posted by Felbrigg at 04:33 No comments: