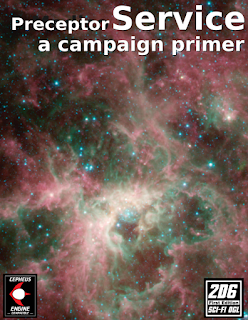 Preceptor Service is a campaign primer for Cepheus Engine (and other 2D6 based science fiction systems). This book is designed to give the referee guidance on playing a new kind of campaign. With this primer you’ll be inspired to start a campaign where the players are not out for themselves but instead, part of service a project, to bring civilisation to the uncivilised and to help them join the community of civilised space.

Players become members of a service with the sole aim of uplifting and protecting burgeoning society. The foes they will have to face include predatory corporates seeking to enslave or strip mine, religions promoting backward practices, native leaders seeking to empower themselves, and hostile environments.

Included in this package is an audiobook and text of the story “Impact” by Irving Cox, which was the original inspiration for this project.

Available from DriveThruRPG
Posted by Felbrigg at 04:01 No comments: 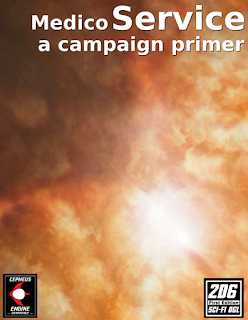 Medico Service is campaign primer for Cepheus Engine (and other 2D6 based science fiction systems). This book is designed to give the referee guidance on playing a new kind of campaign. With this primer you'll be inspired to start a campaign where the players are not out for themselves, but instead cruising the space lanes with the aim of maintaining the health and wellbeing of the Empire.

Included is a new career path that enrols the PCs in the Medico Service. The service is an arm of the galaxy-spanning Empire that focuses on combating the evils that befall man, including but not limited to raging epidemics, erupting volcanoes, and dictators enslaving populations.

Inspired by various novels from the golden age of science fiction you'll be able to put your players into a new type of game.

Included in this package is the novel “This World is Taboo” by Murray Leinster. which was the initial inspiration for starting this primer.

Get it from DriveThruRPG
Posted by Felbrigg at 03:57 No comments:

Station Three is a Traveller one-shot scenario for 1-5 players. Designed to be played in a single session, the PCs are the crew of a System Defence Boat ordered to investigate a distant mystery.

Buckeye Resources have a floating gas mine buried in the turbulent atmosphere of a remote gas giant, but its stopped responding to transmissions. The execs at Buckeye want to know what's happening out there. Station One and Station Two both went dark before disappearing, Buckeye can't afford to lose Station Three.

Station Three is available via DriveThruRPG
Posted by Felbrigg at 05:28 No comments:

Game Planner is a scenario generator for the Traveller referee. Using 44 cross-indexed tables of inspiring terms you can quickly "roll up" the main plot for your scenario and as many sub plots as you need.

This tool is ideal for coming up with a scenario in a hurry, or for inspiration when you have more  time. It provides the elements you need to make an exciting adventure.

The download includes a standard PDF, but also includes A4/Letter PDFs in PocketMod format, meaning you can print a version that folds up into a book let that'll fit in your top pocket.

Download from DriveThruRPG
Posted by Felbrigg at 03:36 No comments:

Rory's Drift is a Traveller one-shot scenario for 1-5 players. Designed to be played in a single session, the PCs find themselves recalled to duty by the Scouting service.

It's time to go back to the Kellin system that was recently returned to the Imperium after the Aslan invasion. The party are reactivated by the Scouting service to make a preliminary investigation of the Scout base in Kellin. With a rogue group of Aslan unwilling to leave, pirates operating in the system, and the Imperium administration trying to execute a cover-up, things will not be straight forward for our intrepid party.

Posted by Felbrigg at 03:33 No comments:

It's time to announce the release of the third volume of the Decopedia series, rather originally called "Decopedia Volume 3".
It's the same type of content as wit the previous volumes...

This book has been written for use with the role playing game Traveller. It's designed to give the referee "drop ins" for their game. Each entry is separate and self contained so you can take it and squeeze it into your own game. Inside you will find, 10 planets, 10 alien animals, 10 people of interest, and 10 story seeds.


The planet descriptions highlight cultural, political and religious elements that make the system interesting to visit, this isn't just a string of statistics. The animals are all designed to inspire or be a part of an interesting encounter. the people of interest are individuals who have made a mark on Imperial society for good or bad, and each story seed is a core idea for generating an entire scenario.


This product was designed for use with Mongoose Traveller, but is compatible with all versions.


Download from DriveThruRPG
Posted by Felbrigg at 03:26 No comments: 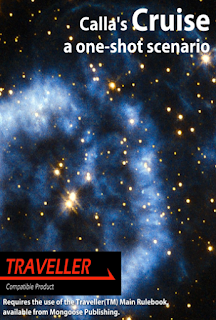 Calla's Cruise is a Traveller one-shot scenario for 1-5 players. Designed to be played in a single session.

A massive star-ship, a liner, carries the Baroness Calla and her entourage to the astounding twin-suns of Lylle. Secreted among the passengers are a blood thirsty and heavily armed band of killers ready to target the Baroness. The PCs are all that stands between the killers and the life of everyone on board.


Available from DriveThruRPG
Posted by Felbrigg at 12:17 No comments: