These rules came about after deciding to buy some Ultra Modern 1/285th scale models of modern tanks. I couldn't find any simple quick play rules so after referring to Gulf war anecdotes and of course Janes recognition guides I came up with these. They are simple to use and rely on the common D6. Suggestions for additional simple straight forward rule additions are gratefully accepted. (These rules were previously published by Wargrid.)

Posted by Felbrigg at 10:41 No comments:

A few years ago I was inspired to refight (in miniature of course) the battle of Rorkes Drift, the fight featured in the film 1964 film Zulu. 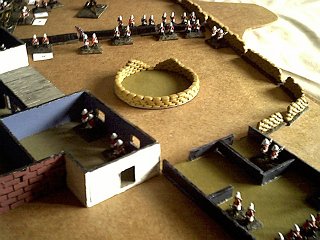 I crafted the terrain, the buildings, painted the miniatures and produced a set of rules to play by. The rules below are the final result. These rules have been used at least five times to refight this battle without a complaint, so I think they are pretty solid. Try them out and let me know what you think .

Posted by Felbrigg at 10:32 No comments: