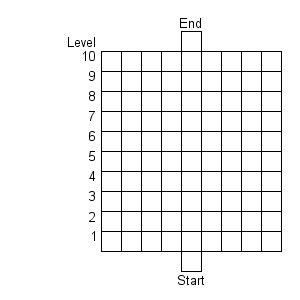 This game is for anyone who is on their own and fancying a Dungeon Bash. All you need are these rules, a piece of paper ( preferably of the graph variety ), a pen and a bunch of six sided dice.

The dungeon is made up of a grid of squares, 9 squares wide and 10 rows deep.  You'll start at the entrance square and begin investigating the rooms finding treasure or monsters

If you're clever and brave enough ( and maybe just a bit lucky too ) you'll get to the end space beyond level 10 and defeat the big bad!

I've been sent this cool DOS-like Java implementation of Solo Dungeon Bash by " D'Aluisio-Guerrieri Josh" which he put together while learning Java. It reminds me of the old fashioned text adventures which were all we had back in the late 80's. I've played it through a couple of times and got a kick out it!

Disclaimer : I didn't write this software so can't tell you how it'll behave.

Wow! Another computer version has been created, this one you can play in your browser.

Disclaimer : I didn't write this software so can't tell you how it'll behave.
Posted by Felbrigg at 12:47