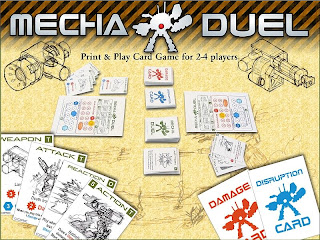 Mecha Duel is a card game for two to four players where each player takes control of a giant Mecha and rides it into the glory of battle. No greater honour can be earned than by standing over the smoking remains of an enemies burnt out Mecha!

This card game has modeled both the tactics and the manoeuvre of combat between giant Mecha. Each turn you will have the opportunity to blast your opponents with lasers, cannon, rockets or any of the other extensive range of weapons. You'll also have the opportunity to play defences allowing you to carry out battlefield repairs , power up shields and duck behind cover.

Mecha battle card game for two to four players that is played in about 30 minutes. You can play as individuals or in teams, or even a three against one special combat. It's simple enought for the young to play and has enough variety and tactics for the older gamer as well.

Buy the game at WargameVault!